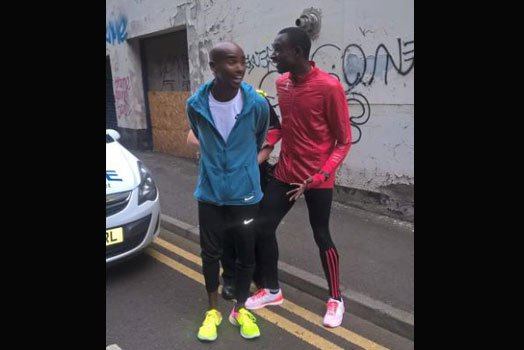 It was later reported to the public that Rudisha — incidentally a Police officer himself — had been apprehended for “speeding” on the streets of Newcastle.

It later emerged, however, that “King David’s” arrest was a perfectly executed publicity stunt by the authorities, probably meant to hype up the UK’s Great North Run marathon.

A number of pictures uploaded on Northumbia Police official Facebook page showed Rudisha and UK athlete Mo Farah being rounded up by the Police on the street.

“We were called to central Newcastle today after reports of a speeding object on the Quayside. Our officers attended and found two men claiming they were Olympic gold medallists and had set off our speed cameras in a practice job. They kept telling us to Google Mo Farah and David Rudisha but we weren’t having any of it so we decided they need to pay a visit to custody. Due to lack of evidence, we had to release them without charge after a brief chat in the back of our police car. Turns out they were telling the truth after all! Good luck tomorrow Mo in the #GreatNorthRun and well done to David in the #CityGamews2016!” read a message accompanying the photos.

This message has since been shared over 9000 times, lending more than enough publicity to the charity sporting event, which has been organized by the City’s Police department.

Kenya’s chief justice warns president not to undermine the judiciary